The ASRock M8 barebones system is based on a BMW design for the Z87 platform, and it is half the width of the Bitfenix Prodigy with a really high build quality. Add to that it won the IF Product Design Award 2014.

The Asrock M8 is sold as a barebone system, which only includes a chassis, power supply, mini-ITX motherboard, fans and optical disk drive

ASRock lay on the aesthetics of an engineering loving person, dealing in straight lines and edges, metallic shades of color including grey and red, with the only real circular part of the design being the front knob that sparks recall to the BMW i-Drive system in their recent range of high end vehicles. In fact this chassis is co-designed with the BMW Group DesignworksUSA team. The chassis comes with handles for easy movement, and is lightweight due to the steel frame/aluminum + plastic construction, which is also nice to touch, making it suitable for a thin and portable gaming PC or Steam Box. 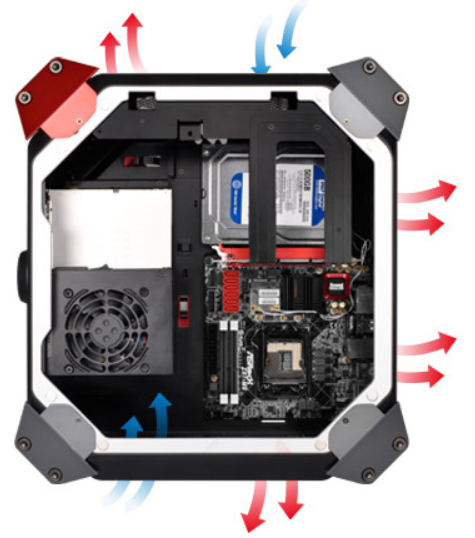 The chassis has space for one 3.5” drive or four 2.5” drives, combined with the single ODD which makes the six SATA ports on the motherboard more than adequate. The motherboard uses SO-DIMM memory, which is now being released in faster and faster speeds for users to go above DDR3-1600 CAS9, and the PCIe slot uses a riser card to allow a GPU to be mounted in-line with the motherboard. Due to the space available for GPUs, the power supply and the cooling power of the chassis, ASRock suggest a maximum of a 200W GPU – this means up to a HD 7950 or a GTX 760. There are provisions for the tall non-reference designs, although ASRock state maximum GPU dimensions of 290mm x 137mm x 43.5mm. So no triple slot cards here.